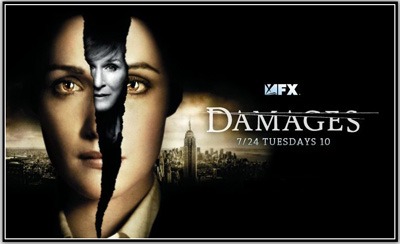 Damages is probably one of my favorite shows. I began watching it after my boyfriend told me about it and the plot really interested me. After watching the first episode, I fell in love. It’s an excellent drama series, and I think the cast is perfect. Here’s a summary of the show:

After her unprecedented victory over billionaire Arthur Frobisher (Ted Danson), Patty Hewes has the legal world at her feet. Just as she’s pondering her next move, Daniel Purcell (William Hurt), a man from Patty’s mysterious past, storms back into her life, catapulting Patty into a new legal challenge. What starts as a domestic murder case, escalates into the highest reaches of government as Patty unearths a vast conspiracy.

At the same time, Ellen is on a mission to take down Patty. She’s agreed to act as an informant for the FBI, assisting them in their criminal investigation of Patty and the firm. As Patty unravels the mystery surrounding Daniel Purcell, she must also negotiate the perilous minefield both inside and outside her office.

Glenn Close is a fantastic actress, she’s done a wonderful job on this series. Her character is powerful and brilliant. Rose Byrne has done a great job too. Well, to be more precise, the whole cast has done a terrific job. I can’t wait for the third season to start airing.