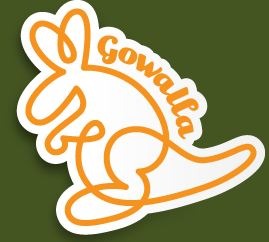 Lately, the trend for social network users is to use geo-location services. FourSquare, Brightkite, Loopt are a few of these services. The one I want to talk about isÂ Gowalla.Â GowallaÂ is a service that began being developed in 2008 and was later released for the iPhone.

Seeing as new phones were being released with different operating systems: like Android and WebOS (Palm), they released a mobile site for Android users with plans of releasing a native mobile application for the new phones’ operating systems. In early 2010, a Gowalla mobile application was launched for both Android and WebOS, definitely increasing their members. Blackberry users can access the mobile website for now, but they will release a native application for it soon. As an Android user, I was very happy when they released the beta application (I was using the mobile website before) and now that it’s a stable build I like it even more.

I consider this service to be my favorite amongst competitors, it’s visually pleasing and it’s fun how you earn stamps with each new place you visit. There are also random items you can get when doing a check-in, and how you can drop and pick-up items in a specific place. There are more features that are pretty cool, if you want to learn more about Gowalla then check out theirÂ site.

These geo-location services have definitely made social networking more interesting (when used correctly and safely, of course) and I’m sure the statistics will show that these services will continue to grow and be more active.

Do you use a geo-location service on your phone? Which one is your favorite and why?

This website uses cookies to improve your experience while you navigate through the website. Out of these, the cookies that are categorized as necessary are stored on your browser as they are essential for the working of basic functionalities of the website. We also use third-party cookies that help us analyze and understand how you use this website. These cookies will be stored in your browser only with your consent. You also have the option to opt-out of these cookies. But opting out of some of these cookies may affect your browsing experience.
Necessary Always Enabled

Any cookies that may not be particularly necessary for the website to function and is used specifically to collect user personal data via analytics, ads, other embedded contents are termed as non-necessary cookies. It is mandatory to procure user consent prior to running these cookies on your website.

SAVE & ACCEPT
Scroll to Top